A Story Is a System Far From Equilibrium

Posted on July 5, 2018 by valorandcompassion 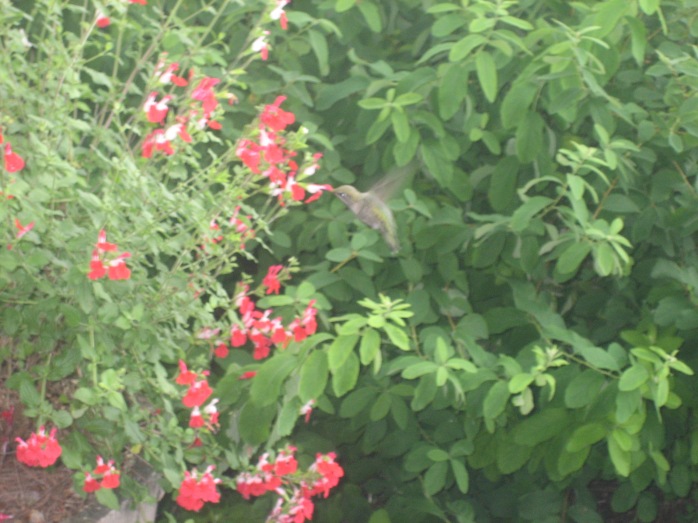 Nothing perturbs the system more beautifully than a hummingbird, as seen outside my clinic window.

At some point on the journey toward publication, aspiring writers get frustrated and ask themselves, “Why aren’t agents and publishers saying ‘Yes’ to my submission? I’ve revised it six times and now it all looks good to me. What’s going on?”

Often the problem lurks on the very first page.

One turn-off to these busy publishing professionals is the “winding country way” style of drawing readers into your imagined world. This gentle prose amble generates plenty of atmosphere, but atmosphere alone does not a story tell.

Imagine strolling down a country lane on a summer afternoon. The sky’s a crisp blue against the upturned leaves of a majestic white oak, planted three hundred or so years ago to mark the perimeter of a farmer’s land. In the field beyond, Queen Anne’s lace, timothy, and goldenrod plants ripple in a breeze. The balmy air offers a spiderweb’s caress to your bare arms. The temperature’s not scorching, just soft and warm. You smell cut grass and wildflowers. You hear crickets and cicadas. Horses peer over a stone fence. It’s a tranquil, beautiful, rapturous day for being, not doing.

My daughter Luthien trotting through a field at Champoeg State Park when she was a year and a half old, offering an expert demonstration of blissful being-doing.

The trouble is that what makes this summer afternoon in the country so special is also what makes it unsuitable for a novel’s opening scene. The very forces that create enriching life experiences can poison stories and rebuff readers. That’s because stories are about doing, not being. When the writer spends too much time writing in this “being” fashion, the story doesn’t sell.

To be sure, this fact troubles me. Being in the moment, leaving behind the constant scrambling “doings” of unmindful life, reveling in beauty without rushing to complete an agenda–these are all activities (being-tivities?) I cherish. I also wince when I read writing advice that seems to pander to the shortest attention spans out there. Are readers really so fickle that they won’t continue past the first page if they aren’t hooked and thrashing like a fish on the end of a line? Don’t readers long to immerse themselves in the sensory glories of the world you’ve created?

Then there’s the conflict thing. We use warlike terms for the dramatic tension that drives a story: conflict or struggle. This nomenclature dates back to classical Greek literature. Ancient Greeks–at least those who wielded temporal power and had the leisure time to compose tales–considered agon (struggle) the source of virtue. Whether it’s the muscular, one-on-one grappling of a wrestling match or the cerebral fencing of a debate, agon honed the self. This attitude has been perpetuated in societies shaped by ancient Greece and Rome. I’m perturbed by the way popular how-to-write advice has uncritically ingested this antique attitude by insisting that writers create endless conflict on every page. Not only does this approach reify fighting as the normative (or even ideal) state of human affairs, but constant conflict can be just as wearing on the reader as static description. The answer to that old comic-book question, “How much excitement and adventure can you stand, true believer?” is sometimes “No more!”

Undeniably, some power exists to attract readers’ attention and hold it. But this power arises as much from caring as from conflict. A writing critique-group friend used to ask the other participants, “Why should I, the reader, care?” Readers invest their time because the skilled writer causes the protagonist to matter to them. To get the reader to give their heart to this character, the protagonist needs to be plunged into a situation where their winning qualities shine, while their relatable flaws get them into trouble.

I prefer to think of it this way: the story starts when the protagonist’s life veers off balance.

Living in balance is a spiritual ideal, but in physics and biology, systems in perfect balance aren’t living systems. Rather, life occurs when a formerly closed and balanced system tips far from equilibrium. We experience inputs from our environment and react–that’s the case in life, as well as in a novel’s plot.

Returning to that country lane, what might happen to the protagonist that would generate momentum for the story, show their true nature (both gifts and flaws), and cause the reader to care what happens to them?

That classic traveler’s dilemma, according to Robert Frost: The Road Not Taken

The protagonist’s life can get nudged out of whack by an external cause. A drunk driver careens over the hill and hits them, leaving them critically injured at the side of the road. A door to an enchanted realm opens up in the stone wall before them. An old flame comes jogging by in the other direction and they recognize one another too late for either to change direction and pretend they hadn’t seen the other.

Or an internal upset may disturb the protagonist, something the rural beauty can’t drive away. They could be brooding over the divorce decree they’d just received when they didn’t even realize their marriage was failing. They could experience the first frightening signs of severe mental illness: a break with reality where the bucolic country scene turns bizarre and menacing.

The good news is that you don’t have to trash your wonderful country-road description–you just need to repurpose it so that it contributes to the story’s forward motion. Instead of ambling down the road, maybe the character’s running away from or toward something. Instead of being a backdrop, the scenery becomes a character in its own right, or a plot generator. What might come out of the field to pursue the character? What might threaten the character from within when they’re desperate for a moment of peace? That’s where their life careens off balance. That’s where the story begins.

Now that’s more like it: a hair-raising moment on a hike at Huashan Mountain in China (Lina D., “The World’s Most Dangerous Hiking Trail,” https://www.boredpanda.com/worlds-most-dangerous-hiking-trail-huashan-mountain-china/). Bye-bye, quiet country road!

2 Comments on “A Story Is a System Far From Equilibrium”